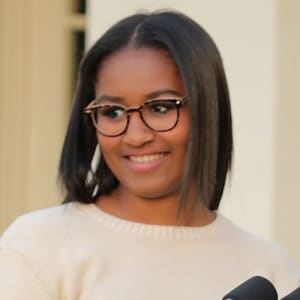 Sasha Obama is the younger daughter of Barack Obama, the 44th President of the United States, and Michelle Obama, the former First Lady.

Who Is Sasha Obama?

Sasha Obama, born in 2001 to Barack Obama, who was serving as a state senator in Illinois, became the youngest resident of the White House since the children of John F. Kennedy after her father was elected as the President of the United States in 2008. Sasha Obama kept her private life private throughout both terms of the Obama administration. She attended the prestigious Sidwell Friends School, where she participated in interscholastic basketball, and accompanied her parents and older sister, Malia, on official trips abroad before beginning her studies at the University of Michigan in 2019.

The first daughter of Barack and Michelle Obama was born in Chicago, Illinois, on June 10, 2001. At the time, her father, Barack Obama, served as a state senator in Illinois. Her mother, Michelle Obama, was about to begin working at the University of Chicago Medical Center as the executive director for community relations.

A meningitis scare that occurred while the younger Obama daughter was small did not prevent her from developing into a healthy and lively child. Sasha continued to live in the Hyde Park neighbourhood of Chicago with her mother and older sister, Malia, after her father was elected to the United States Senate in 2004. During this time, she attended the University of Chicago Laboratory Schools and kept herself occupied by taking piano, tennis, gymnastics, and tap dance lessons.

Sasha was well on her way to becoming a national icon by the year 2007, as her ambitious father ran for the presidency of the United States of America. She made her first television appearance in July 2008 as part of a program on the candidate’s family featured on Access Hollywood; however, her parents later expressed remorse that they had allowed their children to participate in the interview.

The election of Barack Obama as the 44th President of the United States in November 2008 made Sasha, then 7 years old, the youngest resident of the White House since John F. Kennedy Jr., who was 2 months old and Caroline Kennedy, who was 3 years old in 1961.

Sasha and Malia Obama settled into life in the Executive Mansion under the watchful eye of their maternal grandmother, Marian Robinson, after receiving a personal tour of their new home from the outgoing presidential daughters, Jenna and Barbara Bush. Jenna and Barbara Bush gave Sasha and Malia a tour of their new home during this time. A campaign promise was kept by the President and First Lady when they presented their daughters with a Portuguese Water Dog named Bo (and later, a second one named Sunny). In addition, they instituted ground rules that included restrictions on the amount of time spent watching television and a ban on using Facebook.

Sasha Obama spent most of her childhood largely protected from the media’s scrutiny and under the vigilant protection of Secret Service agents who gave her the code name “Rosebud.” She participated in typical childhood activities such as sleepovers and class trips during this time. She developed a close friendship with Maisy Biden, the granddaughter of Joe Biden, who was serving as vice president at the time. Still, she was occasionally included in official presidential business, such as the photo op in August 2010 that sought to portray the Gulf of Mexico as safe following the BP oil spill or the international trips that brought her to the Kremlin in Moscow, Russia, and the Vatican in Rome, Italy. Both of these locations are in Europe.

Sasha began displaying more of an independent personality shortly after the beginning of her father’s second term in office, as revealed in Michelle Obama’s memoir titled Becoming. She became less interested in participating in traditional White House events, such as the annual pardoning of the Thanksgiving turkey. Instead, she became a fan of cooking shows and “commandeered” the kitchen in the White House residence with her friends. As an avid sports fan, she accompanied Vice President Biden and Maisy to the final match of the 2015 FIFA Women’s World Cup, which took place in Vancouver, Canada.

After Sasha attended her first State Dinner in March 2016, she was caught getting a thumbs-up from Malia while she was chatting with heartthrob actor Ryan Reynolds. That same summer, she got her first job at a well-known seafood restaurant on Martha’s Vineyard.

Life After the White House

Sasha, who was only 15 years old when her father’s administration ended in 2017, was too young to strike out on her own, so she moved with her parents to a different neighbourhood in Washington, D.C., where she reportedly scored a favourable living arrangement while she finished out her senior year of high school. This was in contrast to her older sister Malia, who was taking a break from her studies before enrolling at Harvard University.

Following Sasha’s trip to Miami Beach in January 2017 with Maisy, the rest of Sasha’s family travelled to Indonesia during the summer of that same year for their holiday. In the spring of 2018, she went to the Broccoli City Festival in Washington, DC, where she was pictured beside rappers Cardi B and Offset. In the summer of that same year, she accompanied her mother to a Beyoncé and Jay-Z concert in Paris.

At Sidwell, Sasha developed into a competitive swimmer, but she was most passionate about the sport of basketball. President Obama is famous for having assisted in coaching his younger daughter’s basketball team to a league championship during the 2011–2012 school year before being forced to step aside due to negative attention from other parents. Sasha, also active in the performing arts, was selected as one of the children from the D.C. area to participate in a production of The Nutcracker by the Moscow Ballet in late 2012.

Sasha’s decision to attend the University of Michigan rather than pursue her education at one of the prestigious Ivy League universities after she graduated from Sidwell Friends in June 2019 generated quite a commotion. She, along with many other students impacted by the COVID-19 pandemic, was forced to spend her sophomore year of 2020-21 at home with the rest of her family. She kept up with her classes by tuning in remotely and kept her parents on the edge of their seats with midnight baking sessions.

Sasha’s mother affectionately refers to her as “Sassy,” and others refer to her as the “family cutup.” Her older daughter is often referred to as her father’s “music guru,” He has been known to joke that he is “afraid” of his younger daughter.

Sasha has given the world a glimpse of her musical preferences by singing and dancing in several videos that have since been deleted from TikTok. However, she has also revealed a serious side by participating in demonstrations to protest police brutality following the deaths of George Floyd and Breonna Taylor in 2020.

Everything Is Wrong Lyrics By Lincoln